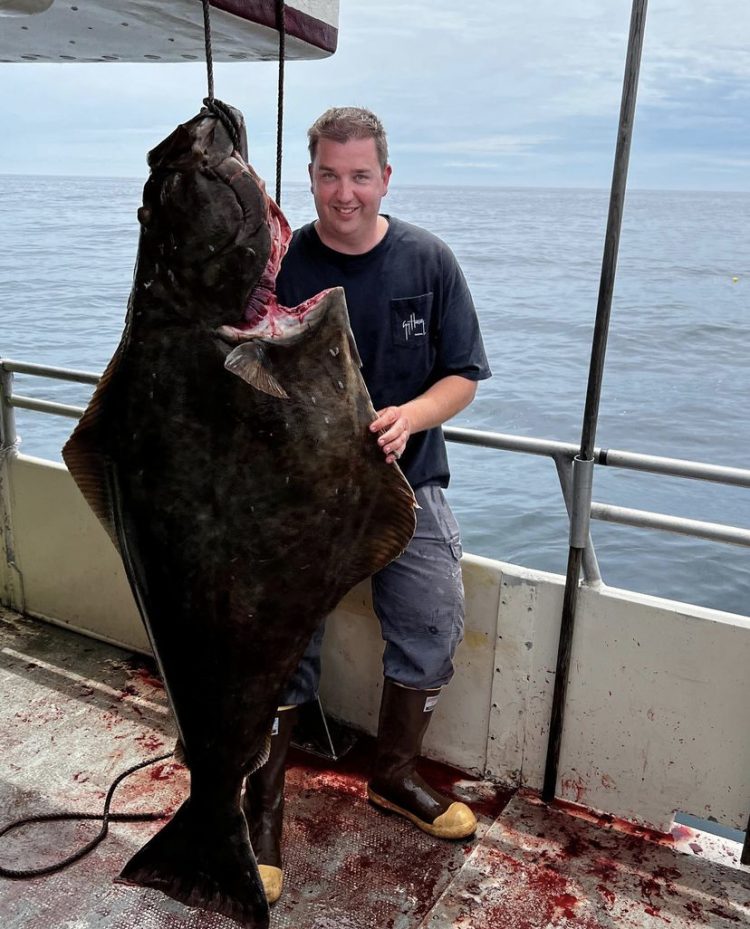 “I never planned on catching that fish in the first place, even in my wildest dreams.” said Capt. Michael Mann of Gloucester Fleet Deep Sea Fishing and Charters. On June 12, 2022, he landed an astonishingly large Atlantic Halibut on rod and reel. The fish tipped a local lobsterman’s scale at 161.5 pounds and was measured to be 72 inches long. The sheer size of this halibut is not the only facet that makes this catch unlikely, however.

Late on the night of June 11, Capt. Mann and crew prepped the boat for one of their popular overnight excursions to Fippennies Ledge. Born out of Covid-19 passenger restrictions, these trips allow 13 anglers to board the 70-foot “Lady Sea” in hopes of filling their freezers with pollock and haddock. The charter begins at 11pm, when Capt. Mann begins his 6 hours of navigation away from Gloucester towards the ledge, 65 miles into the “wide open ocean.” Upon arrival, anglers dropped baits alongside the edges of Fippennies sandy plateau, reeling up haddock and pollack.

After moving to the gravel-covered tabletop of the plateau, an older gentleman named Nick was given quite the surprise when his 5’5″ wooden-handled bottom fishing rod was bent in a “U”. Capt. Mann checked the line, and after receiving a few thrashing headshakes, determined that Nick had hooked up to a humungous fish. Capt. Mann asked if Nick wanted the battle, to which he replied, “I left my ego at the dock.” Mann fought the fish for 30 minutes just to get it off the bottom. This feat became even more impressive when Mann detailed the tackle he was equipped with. The reel, a decades-old Penn Jigmaster, was skipping and grinding underneath the enormous tension. This reel was spooled with 50-pound-test braid tied to a 50-pound-test monofilament leader. The splice between braid and leader, coupled with the client-tied jig and teaser rig shockingly outlasted the fight. At last, the crew was able to gaff the fish and get it over the rail.

All on board were in disbelief, especially Mann himself, who said, “This was my first time specifically targeting halibut.” In fact, he had never caught one longer than 20 or 30 inches. “I was starting to feel left out,” he said after hearing infrequently of other charter boats landing large Halibut by surprise. However, reports of sizeable Halibut like Capt. Mann’s have been increasing in the last 5 or 6 years.

This brings new hope for a species that was commercially overfished in New England for many years. “In the 70s and 80s you would hear stories of guys going out and catching Halibut,” Mann stated, “but until recently they were not abundant enough to be a target species”. Fippennies’ Ledge is now closed to commercial fishing, but recreational and charter boats can enjoy its abundant groundfish.

Although he still does not consider himself a true halibut fisherman, Gloucester has rallied around Gloucester Fleet and Capt. Mann’s catch. “There isn’t a person around here who hasn’t walked up to me saying congratulations,” Mann reported happily. A catch such as this means a great deal in a town like Gloucester, which Mann described as “through and through a fishing town.” Mann is satisfied seeing that his unlikely fishing feat has brought light to a quintessential fishing village in Gloucester and a resilient species in the Atlantic Halibut.

The post 160-pound Halibut Caught off Gloucester, MA appeared first on On The Water.

Did you miss our previous article…
https://www.hardcoregamefishing.com/big-time/